dawn of a new day

At the beginning of 2014, I was looking for a new challenge.

My two most recent roles were at fast-growing technology companies which became household names. I enjoyed their successes, but felt the urge to join a much smaller team. I wanted to build. I was looking for a pre-IPO technology startup that had the potential to be the Next Big Thing.

I was already in final rounds with other startups when an e-commerce SaaS company contacted me. Bigcommerce already had a great product/market fit, an established (paying) customer base of nearly 50,000 merchants, and impressive YoY revenue growth.

The more research I did, the more excited I became about the opportunity. Bigcommerce was cited by Inc. Magazine on their list of fastest growing private companies in 2010, 2011, 2012, and 2013 (spoiler: it happened again in 2014). The company also had an aspirational goal that resonated with me:

to democratize e-commerce for merchants around the globe.

I was thoroughly impressed with the intelligence and passion of co-founders Eddie Machaalani and Mitch Harper. They established their company in Sydney, expanded to a 2nd location in Austin, and were planning a brand new office in the SoMa district of SF.

I visited the SF office shortly after the lease was signed, and had one thought: potential.

In the span of a few days, I went through a flurry of video interviews with the leadership team in Sydney and Austin. This team moved fast!

Everyone I spoke with was ambitious and intelligent, but also understated and down-to-earth. Bigcommerce has a word to describe this rare combination of humility and ambition: humbitious.

I soon found myself in Sydney to meet the team in-person. All of the conversations I had with the leaders and the engineering team reinforced the feeling that I should join this company. I decided to seize the opportunity and see where it would lead. 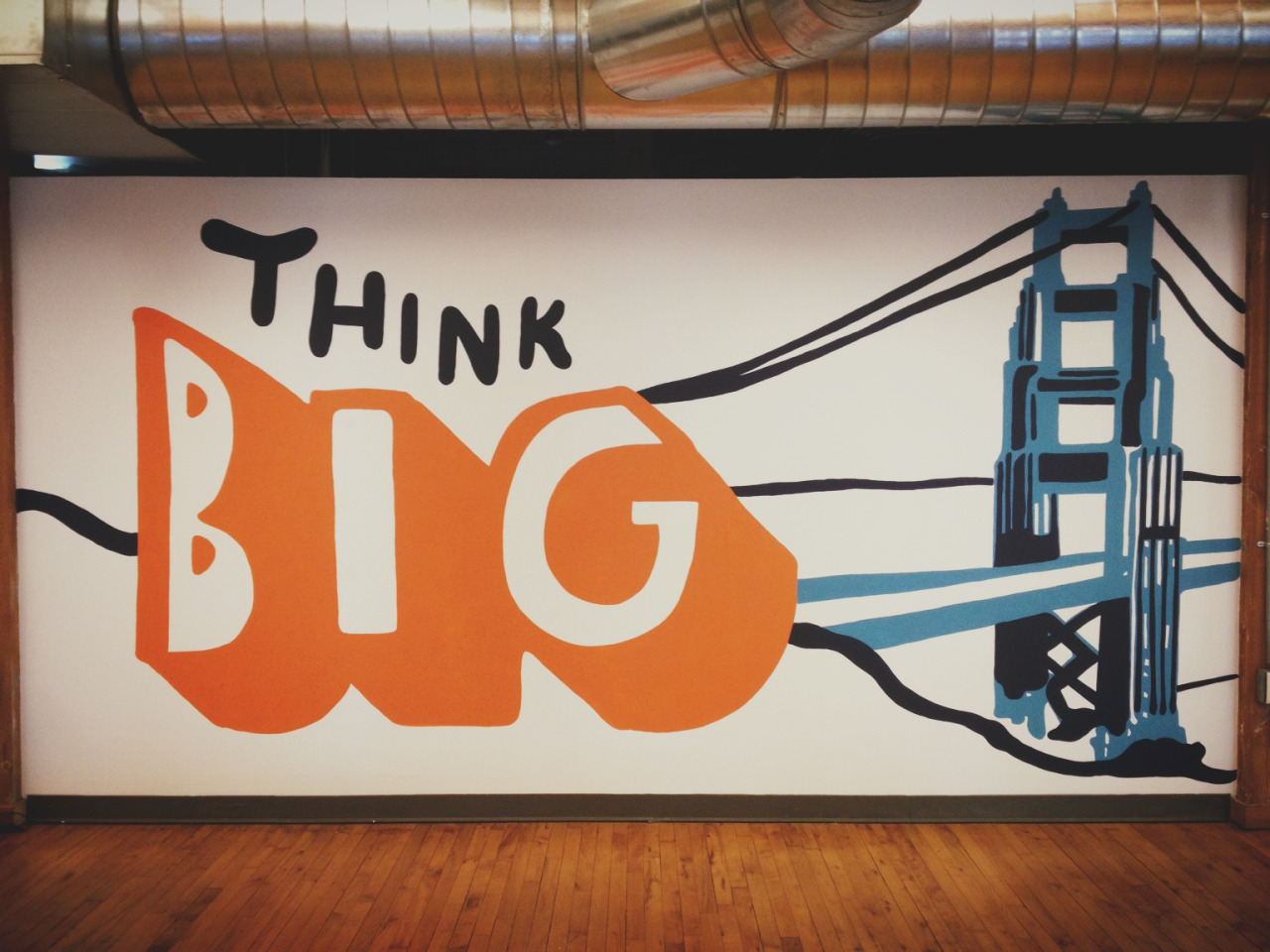 I arrived back from my visit to Sydney in a bit of a haze. I’d committed to leading the engineering team and to staffing a new SF office from scratch. That would mean hiring engineers in one of the most competitive markets on the planet. It was a big challenge.

Think Big is a motto at Bigcommerce, and we had it painted on the wall of our fledgling SF office. It seemed appropriate.

Our executive leadership team was aligned: hiring for the new office was a company priority. Bigcommerce started to get press coverage about our ambitions to grow the team, but that wouldn’t be enough to get noticed in the SF technology market.

We launched a recruiting campaign that was sure to make waves in SF: marketing our jobs at the shuttle stops of established tech companies. We handed out breakfast along with cards that declared:

Bigcommerce is hiring engineers in San Francisco. Get off the bus and onto a rocketship! 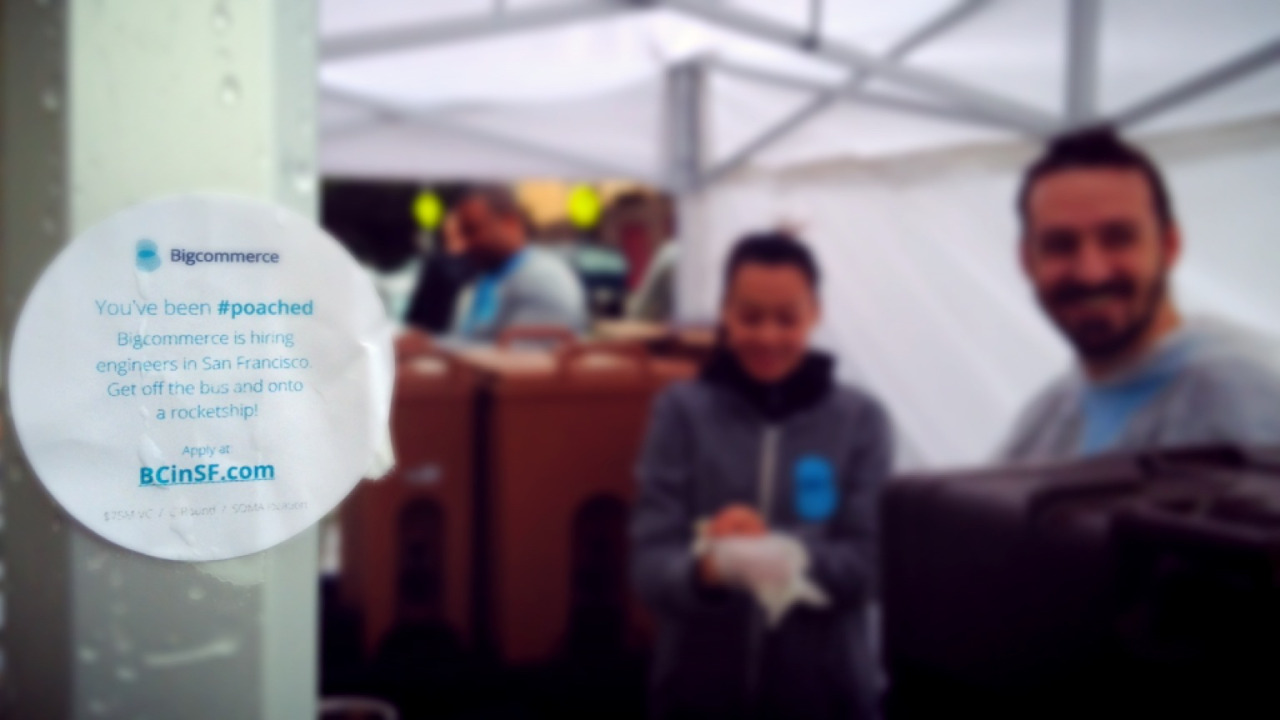 Our campaign was creative and fun. It got the attention of the press, career sites, and (most importantly) candidates across the Bay Area. To help with recruiting and interviewing we invited our engineers from Sydney for extended stays in SF. A beneficial side effect was improving the time overlap between corporate HQ in Austin and the engineering team. 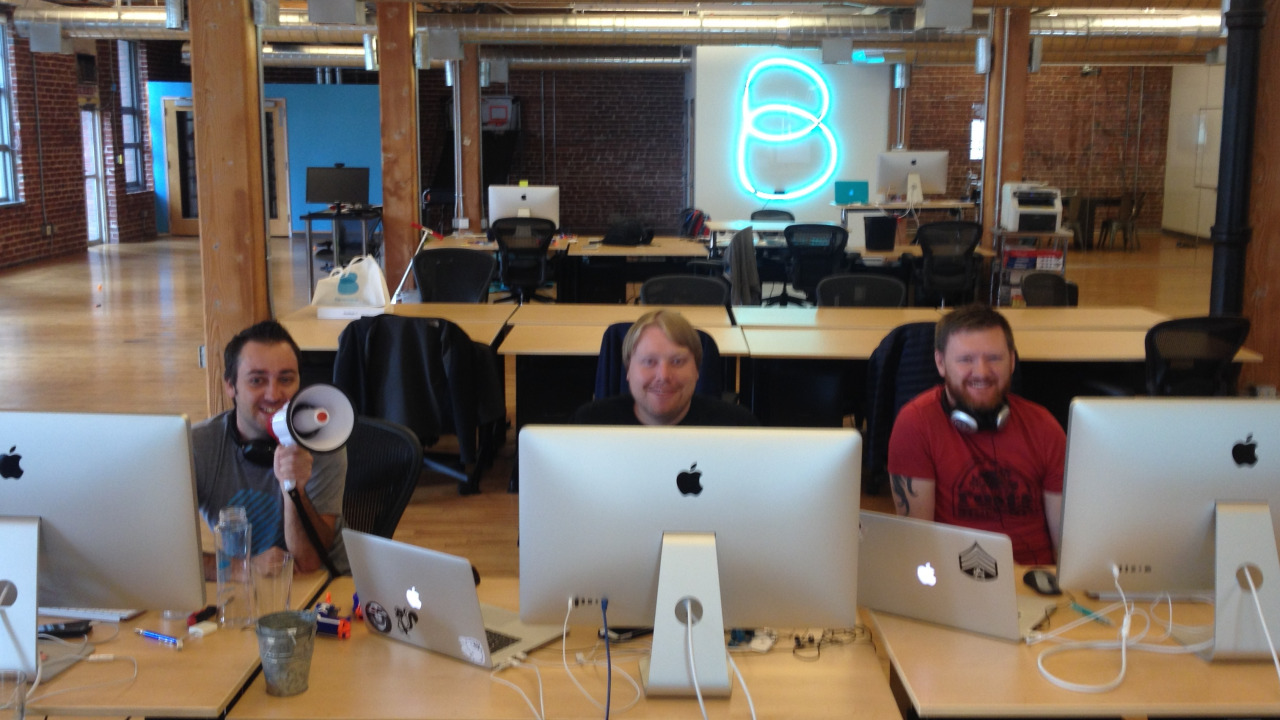 Staffing a new team from scratch was exhausting. Every day was a constant stream of sourcing, phone screening, interviewing, networking, and reviewing resumes. I was selling the mission and the future of the company to every single candidate. Although tiring, it actually wasn’t hard._ I was so convinced of the opportunity at Bigcommerce that I made the leap of faith myself._

With some members of the team now in SF, we started a rhythm of inter-office standup meetings (caveat: we are still trying to improve A/V quality). These meetings started as a daily routine, but we’ve since scaled back the frequency to a few times per week. This strikes a good balance between transparency and having enough content to make the meetings worthwhile. 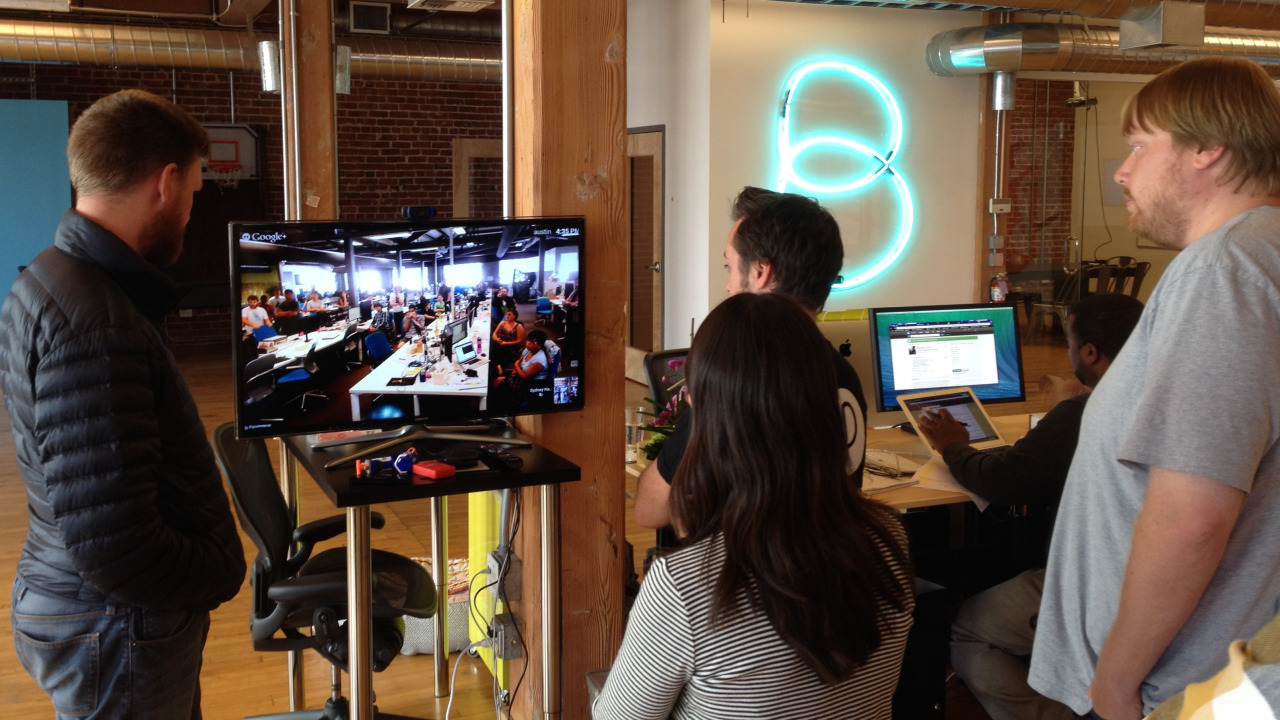 The earliest days in the SF office were daunting. Would we be able to hire great engineers? How quickly can we staff up the team? Hiring the first traunch of engineers was the toughest hurdle. After that point, we were able to get a snowball effect and draw others into the company.

I’ve always found employee referrals to be the best source of qualified applicants. Of course we offered a referral bonus, but once again decided to do it in a creative and fun way.

As we grew our engineering team, I shifted my focus to staffing great leaders. One member of our Sydney team was promoted to Head of Engineering for the Sydney office.

For the rest of my team, I looked for accomplished technology leaders who were specialists in their area. But that wasn’t enough. I also wanted a leadership team that would work well together. I was hiring not just for competency but also for culture fit. At Bigcommerce, we call this hiring for both bucket 1 (competency) and_ bucket 2_ (culture).

After passing over many candidates who were qualified but not the right fit, we eventually assembled an amazing leadership team. It’s the best group of leaders that I’ve had the pleasure of working with.

We’ve grown our SF presence significantly in the past 9 months, with recent great additions to Engineering, Product and Program Management. There are now 75 people in our SF office! In fact, we’re moving to a bigger office in the next two weeks to accommodate our future growth plans.

The broader team at Bigcommerce also continues to impress me. Our executive leadership team is top-notch, humbitious, and incredibly aligned. Every week I’m so thankful for the support I receive from each member of the group. We’ve accomplished so much together in 2014 in our product and our business.

Our phenomenal team also includes our investors and advisors. This year we closed our $50M Series D which expanded our investors to SoftBank, Telstra, and American Express in addition to General Catalyst and Revolution. We also expanded our advisory network to include Chris Fry and Patty McCord.

In November, we had our first simultaneous Hackathon across all three of our offices. The Hackathon had participation among 85% of our engineering team and was a roaring success. Our CEO made it to the SF office for the presentation of the Hackathon awards (and requisite photobomb). 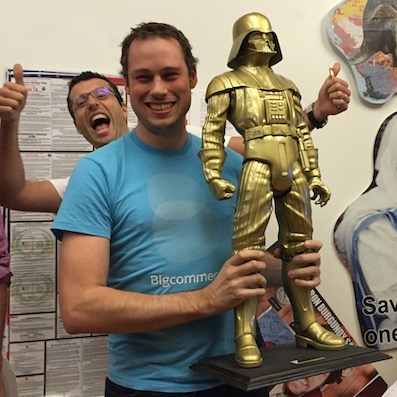 I’m especially proud of the performance of our team and platform this Holiday season. During the critical period from Black Friday thru Cyber Monday, our platform had 100% uptime for our merchants. In addition, we observed 300% more traffic for merchants on our platform.

By providing a solid platform during the holiday season, the engineering team delivered on the Bigcommerce mission statement:

Be the #1 e-commerce provider in the world by creating and delivering software that changes people’s lives.

In December, we had our first R&D Leadership Offsite in SF. We discussed where we want to be as a team at the end of 2015. 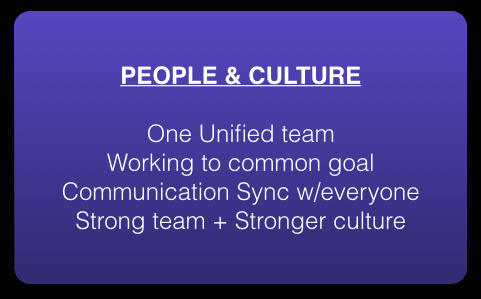 It’s a short list, and will be something we strive to achieve every day. We will continue to grow and refine how we work together as one global unified team.

I’m looking forward to 2015. If it’s anything like this past year, it’s going to be a blast! 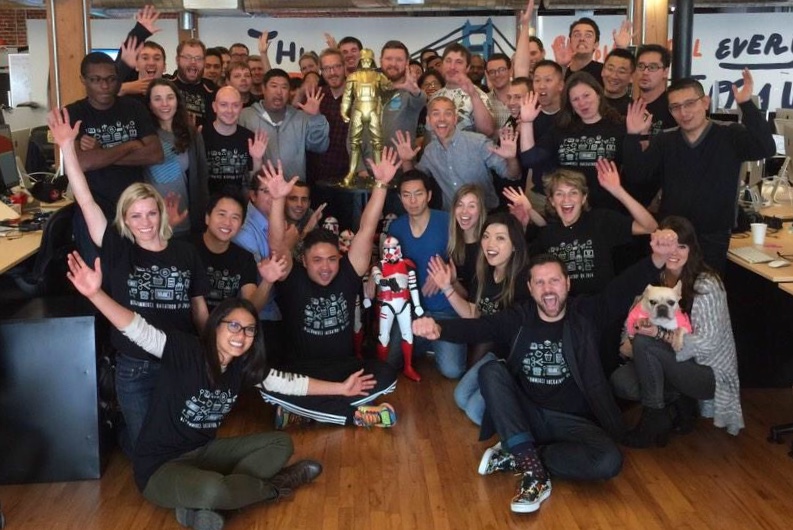 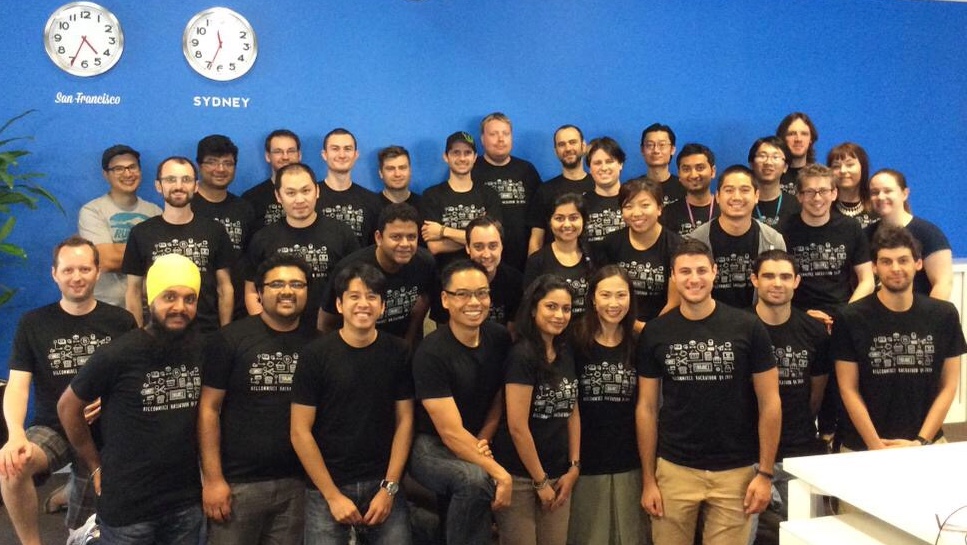 Bigcommerce R&D in Sydney (and a few visitors from SF)